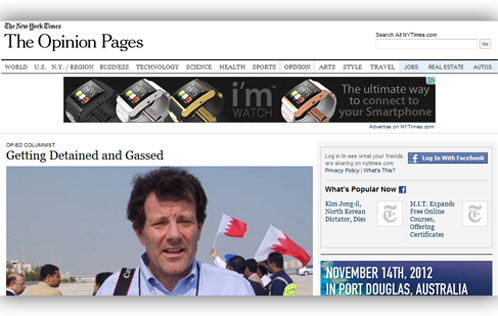 Nick Kristof, the Pulitzer Prize-winning journalist from the New York Times, was back in Bahrain for the first time since he famously reported from the Salmaniya Hospital at the height of the unrest earlier this year. At the time I commented on his reporting in this post.

There is something about the man that irritates me. Perhaps it is because his reporting tends to be as much about Nick Kristof as about the events he describes. In his February piece, he is in the Salmaniya Hospital as the casualties arrive. In his recent report, Getting Detained and Gassed, he once again gets to be part of the action. He and a colleague go into a Shia village, become embroiled in one of the regular flare-ups between police and youngsters, and end up in the back of a police car for half an hour. Nothing wrong with being on the scene, but becoming a protagonist as well as an observer can leave you vulnerable to accusations of being manipulated by one party or another.

Our hero also revisits doctors from Salmaniya and and human rights campaigners that he encountered on his last visit, and – presumably for balance – talks to a member of the ruling family who makes the case for the progress that the country has made since March.

The article is long on opinion and short on analysis, and the interviewees in the accompanying video rarely have the chance to voice more than a few broad-brush opinions. And I suspect that Saqer Al-Khalifa will not have been overjoyed at the editing of his interview.

Kristof’s gist is that Bahrain is a friend of the US, and that the US should be more careful about who it selects as its friends in the region.

In his latest pieces he does acknowledge actions by the government to address the issues facing the country, one of which, of course, is to grant Nick Kristof a visit visa.

Maybe what bothers me is that Bahrain is a soft target. I can think of a couple of neighbouring countries where someone in his position would not be allowed into the country in the first place, let alone to witness scenes of disorder or interview political or social dissidents. And one of them is a firm friend of the US. That he has been able to come and go in Bahrain in itself differentiates the country from its less tolerant neighbours.

I leave it to others to comment on the content of his latest report. But I would suggest that it is relatively easy for a big cheese reporter to parachute in and out of Bahrain every few months and pontificate on “the situation”. As those of us who live in the country will testify, the challenges facing Bahrain are far more complex than can be summarised in a thousand-word article or an eight-minute video.

Nick Kristof is a distinguished and highly acclaimed journalist and author. I admire him for his efforts to raise awareness of human rights violations in Darfur, and for his work on the 2003 Iraq war. He has achieved so much in his career that questioning his work almost feels like criticising the Pope. Yet I can’t help feeling that at times the story takes second place to his personality, unfair as that may be.

I prefer journalists who are a little less arrogant and a tad more reflective. Maybe that’s because I’m more used to the likes of the BBC’s John Simpson and Frank Gardner, who tend to use a less abrasive technique but are no less distinguished than Kristof. I prefer to be led to a conclusion rather have it slap me in the face. And if I am to be slapped, give me the contrarian hand of the recently departed Christopher Hitchens any day.