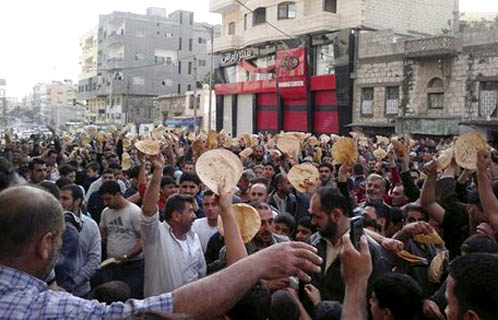 Osama Bin Laden’s assassination by US Special Forces on May 1 offered embattled Arab leaders such as Syrian President Bashar al-Assad a welcome reprieve in the past week.

Men like Mr. Assad, Libyan leader Col. Moammar Qaddafi and Yemeni President Ali Abdullah Saleh are fighting for their political survival on two fronts: the streets of their towns and cities, and in the media.

For the past week, the media front was largely theirs with Bin Laden’s demise dominating the news. It offered Assad & Co. an opportunity to tighten their grip on the flow of news and a welcome distraction from the blood being shed in their names.

An estimated 600 people have been killed by Syrian military and security forces since mass anti-government protests erupted almost two months ago in the most serious challenge to Mr. Assad’s 11-year old rule. Many more have been arrested. Syrian troops backed by tanks stormed the Mediterranean coastal city on Baniyas this weekend, cutting electricity and phone lines and besieging neighborhoods in a bid to quell in the mushrooming uprising. Today (May 8th) tanks rolled into Tafas, a southern town near the besieged city of Deraa.

Mr. Qaddafi opted for a different approach. He invited international media to Tripoli but curtailed their freedom of movement and access so that they could only report what he wanted them to. By doing so, Mr. Qaddafi ensured that his opponents in rebel-held parts of Libya did not have a monopoly on the flow of news to international media.

At the same time, Messrs. Assad, Qaddafi and Saleh have sought to intimidate the media with expulsions and arrests. Mr. Saleh has expelled those foreign journalists whose reporting he found too hard hitting. Both Syria and Libya have arrested journalists: some 16 foreign media personnel are being held by Mr. Qaddafi’s forces while Syria has detained a reporter for Al Jazeera English.

The restrictions on the media in the case of Syria make it difficult for news organizations to independently verify news emanating from the country. Foreign media are reduced to contacting residents inside the country whose credibility as well as the credibility of their version of events they cannot fully check.

Television news is dependent on amateur video that cannot be verified, and that is often provided by volunteer groups associated with the protesters. As a result, news organizations that pride themselves on the integrity and independence of their reporting are often forced to lower their standards of verification.

A 28-year Beirut-based old cyber activist, Rami Nakhleh, who says he escaped Syria on a motorcycle, has emerged as one of several key links between anti-government protesters and the international media. A political science student at the University of Damascus-turned-political activist, Mr. Nakhleh has become a popular online figure with thousands of followers on Facebook and Twitter.

“We wanted to make sure that all pictures of the repression are shown on all television networks around the world. We seem to be succeeding—with nothing but our hard work, we have managed to anger the regime of the Assad family,” he says.

Disrupting the Syrian government’s efforts to impose a news blackout has been no mean feat. People like Mr. Nakhleh are but the final link in a chain. Amateur video is not only shot on individual’s cellphones but often with cameras disguised as pens and uploaded on satellite phones, foreign SIM cards, and small portable satellite dishes that had to be surreptitiously purchased and distributed throughout the country.

Despite the lack of direct access, international media go to great length in their attempts to ensure the accuracy of their reporting and the materials that they broadcast. For example, the weather in video is matched to weather reporting on the day events portrayed in amateur video are said to have occurred. Video is shown to people familiar with the reported location in the hope that they can verify that it was shot where it was said to have been filmed. Native speakers are asked to verify the accents of those inside Syria contacted by phone.

Of course, none of this competes with first hand reporting, but is the best media can do to ensure that they are not totally muzzled.

In a bid to undermine the credibility of international reporting—and most certainly also to intimidate foreigners—Syrian authorities say they have opened an investigation into foreign media outlets they claim had instigated the violence in the country.

“The committee has begun collecting evidence and documents to support the lawsuits in front of the international and national competent courts against those who had made the unfair acts,” the agency said.

On balance, however, the media restrictions have so far failed to remove the popular revolts from the headlines even if they were briefly overshadowed by Osama Bin Laden’s death.

The revolts are too big and too consequential a story for international media to ignore even if access is limited, if not impossible. The flow of amateur media has ensured a constant stream of images that keeps brutal crackdowns in the public eye and maintains pressure on the international community not to stand idly by as unarmed civilians are killed for peacefully seeking to gain greater freedom.

Embattled regimes have also failed in their effort to choke off independent reporting to ensure that their version of events dominates the news. State-run media lack credibility, as do claims five months into the mass protests sweeping the Middle East and North Africa region that foreign intervention and manipulation are at the root of the crisis.

Persistence and perseverance on the part of the international media, coupled with technological development, has relegated to history the days where repressive regimes could ring fence their countries and dictate a narrative.

To be sure, there is much that occurs in Syria, Libya and Yemen that escapes international scrutiny because of the efforts to control the flow of news. Yet, enough news of how governments employ brutal methods in their bid to hold on to power escapes through ever wider cracks to enable the media to bear witness—even if professional standards of verification cannot always be fully met.