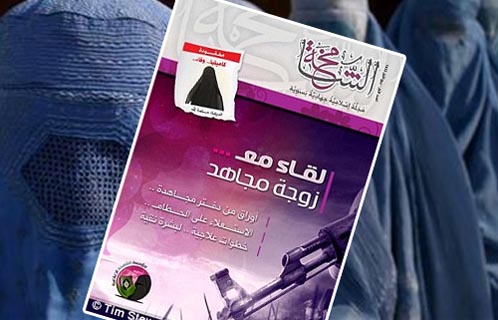 I remember early editions of “Soldier of Fortune” magazine and classified ads which would appeal to mercenaries.  Even now, Soldier of Fortune magazine is described as “…the right of the individual to keep and bear arms… By opposing tyranny of all kinds, we support the basic freedom of mankind.”

Has Al-Qaida taken a lesson in publishing from Soldier of Fortune?  The first issue of “Al-Shamikha” magazine made its debut in early March. Al-Shamikha, meaning ‘Majestic Woman’ in Arabic is a women’s magazine which Al-Qaida has combined elements of Soldier of Fortune and “Cosmopolitan” magazine into a slick glossy publication targeting Muslim women.  Al-Shamikha is published in the Arabic language through the Al-Fajr Media center.

Al-Shamikha articles encourage Muslim women to marry a mujahedeen (freedom fighter…a la Soldier of Fortune) on one page and in the next advise Muslim women how covering the face maintains the perfect skin (reminiscent of Cosmopolitan and its beauty tips).  Interviews with the wives of martyrs praising the actions of their late husband are also featured. The next issue is promising further articles on skin care and how to wage electronic jihad.

The debut of such a publication as Al-Shamikha is further confirmation that Al-Qaida is “wooing” and targeting the Muslim woman.  It is pulling out all the tactics towards influencing and shaping their minds. The interviews with wives of martyrs make it sound like a badge of honor and pride for a Muslim woman to marry and “support a mujahedeen against infidels.”  The teaser of the future issue on how to wage electronic jihad may intrigue and encourage more Muslim woman to become internet savvy and active in social media.

How do Muslims and Muslim women in particular counter this latest offensive by Al-Qaida?  Would Saudi Arabia promote and support a group of Saudi women to produce their own version of an Al-Shamikha which specifically targets and presents an opposing perspective to Al-Qaida’s picture of a majestic (Muslim) woman?  It could even debut with an article on how a Muslim woman can recognize the signs of an electric jihad or what to do if a spouse or other family member is showing signs of supporting Al-Qaida.

What do YOU think?

One Response to Al-Qaida’s Alternative to Cosmo Magazine