UAE and Waste: On Your Bike You Old Mucker 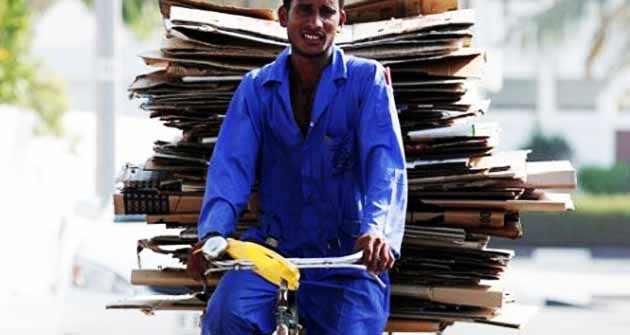 The United Arab Emirates sits smack bang on the socio-cultural tectonic plate that divides the east and west of humanity. With remarkable ethnic and nationalistic diversity, it’s home to people of all faiths, shades, backgrounds and origins. We come from around the world to live here for one reason and one reason only.

We’re all better off here.

That’s as true of you and me as it is of labourers and housemaids. It’s one reason why the crime rate here is so unbelievably low – we’re all on the hog’s back and wouldn’t risk our privileged position just to pick a few pockets or steal money from someone’s car. Other reasons include, it must be said, a draconian judicial system. I’ve seen the cells (from the oustide, thankfully) and stumbling lines of prisoners in leg gyves. You don’t want to be there.

But better off is relative. My better off is a great deal more clover-lined than, for instance, an uneducated man from the Swat Valley or the Bangladeshi flood plains. For them, better off would be something simple like a decent billet, regular food, the absence of constant fear and a few dollars to send home every month. In fact, there are people here whose ‘better off’ is combing the rubbish bins in the streets for cardboard, tin cans and even plastic. They sell these to recycling companies. You’ll often see chaps pedalling along with a great stack of cartons bungied to the back of their black-framed Chinese pushbikes.

Well, they’re a thing of the past now. Sharjah Municipality has just herded them all up – 150 of them over the past six months according to Gulf News – to protect Sharjah’s estimated 10,000 dumpsters from their unwelcome depradations. You’d have thought they weren’t hurting anybody, wouldn’t you? Even that this form of recycling, perhaps an uncomfortable sight for those who’d rather pretend this sort of thing didn’t happen, is nevertheless actually efficient and a demonstration of free market economics at work. Cripes, you might even get carbon credits or something.

But no. Sharjah has not only nicked them all, but has issued them with fines ranging from Dhs 1,000 to Dhs 50,000. Where in blue blazes is somebody who’s making his living rooting through bins going to find Dhs 1,000 to pay a fine?

“Raiding waste bins is considered a violation of Municipality property, as there is a special recycling plant for the various types of waste,” a municipality spokesperson told Gulf News. And therein lies the answer. The dumpster divers’ few pennies here and few pennies there tend to rather mount up with 10,000 bins at stake and there’s Bee’ah, the national environmental company, at the end of the line, making revenue from recycling. Because where there’s muck, there’s brass…

You can only hope that these people are shown clemency in the traditional Ramadan amnesties.