Taxis in the UAE – Who’s Being Taken for a Ride? 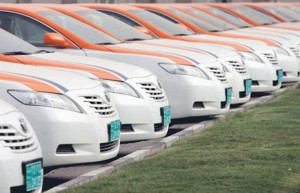 When taxi fares went up in Sharjah earlier this month, none of the newspaper stories covering the event made mention of the fact that drivers’ targets went up as well. Drivers now have to earn Dhs 10,000 in a month to gain a 35% commission.

We’re still paying the Dhs20 inter-Emirate surcharge between Sharjah and Dubai (and vice-versa), which was introduced, if we remember, because of the heavy traffic between the two. That traffic’s no longer a problem, but the taxi companies are never going to let an easy Dhs15 go. (Dhs 5 goes to the driver, at least that was the idea). It’s expensive stuff, this taking a taxi. And yet the drivers seem to be worse off than ever – although I don’t see the large numbers of middlemen at the taxi companies and regulators suffering.

The drivers are under enormous pressure, with a series of iniquitous fines that includes a Dhs100 fine if they lodge the day’s takings after 6pm. If a driver doesn’t make his daily target of Dhs 275 for three days running, that’s it. Out. The cap on daily petrol expenditure and a requirement that 50% of all travel should be passenger-carrying, means that drivers won’t pick up in certain areas, taxi ‘black holes’. Sharjah’s University City, for instance, is highly unpopular with drivers. Many drivers have private customer lists (like Mr G, who runs a massive network of customers and is more frequently on the phone than off it) but resist University jobs. Their least favourite is University to airport – a 10 minute ride that entails travelling 30 minutes out of the city and back again.

Drivers who become involved in accidents have to sit around while the car is in the workshop – not earning a penny. As if that isn’t bad enough, they have to pay the insurance excess, which is Dhs1,500. That’s about two week’s earnings. At least the high excess keeps the company’s premiums down, hey.

Taxis now actively avoid picking up groups of Indian men for fear that they’d be accused of freelancing – charging multiple passengers a fare lower than the meter that amounts to more than the meter amount. However, if they’re found refusing a fare, they can be fined. It’s all a bit Catch22… Appealing the fines, which can be remarkably arbitrary because the inspectors doling them out are on commission based on the fines they award, is of course futile.

Relaying all of this, Mr. G. laughs but there’s more than a trace of bitterness in his laughter. I ask if drivers will start going back to Pakistan now the screw has tightened so much and he laughs again, shaking his head and muttering ‘Pakistan’.

With families recovering from the floods, many drivers have no option but to do all they can to stay in work and scrape together some money, any money, to send home.

Many are working 16 hour days, seven days a week, 52 weeks a year and are dangerously tired. Mr G himself is perma-tired and age is taking its toll, he’s becoming forgetful to the point where we’re having to remind him of our destination several times on a journey. He has the road sense of a suicidal hedgehog and a predisposition to awful bouts of indecision that can reduce me (not a good passenger at the best of times) to feverish gibbering as we avoid the certain consequences by hare’s whiskers each time.

With my car ‘in the shop’, I took a taxi from the street. I tried to bear all of these iniquities in mind and be sympathetic to the stinking, surly Peshwari oaf who sullenly drove me into town, tutting and swearing all the time under his carious breath. As I sat on his filthy, stained seats and battled the urge to tell him to pull over and just get out of my life, I did find myself wondering quite how we ended up paying so much more for a new age of regulated, company-owned taxis that offer both the customers and the drivers so much less.