Saudi Arabia: How Far Can a Fatwa Go? 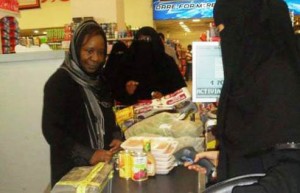 In less than two months a new door which had opened for Saudi women has now been slammed closed.  I’m referring specifically for the opportunity of Saudi women working as cashiers.  It’s odd…Saudi women (at least for now) are still working in mixed environments such as hospitals, but a position as a cashier has been deemed as inappropriate.

According to the Committee on Scholarly Work and Ifta, the official issuer of fatwas, or Islamic religious rulings, under the Council of Senior Scholars, the top authority for Islamic issues in the Kingdom, “it is not permissible for a woman to work in a place where they mix with men.”

“It is necessary to keep away from places where men congregate. Women should look for decent work that does not make it possible for them to attract men or be attracted by men.”

The ruling was signed by Grand Mufti Sheikh Abdul Aziz al-Sheikh, the head of the Council of Senior Scholars, and six other members of the fatwa committee.

I wonder how Benazir Bhutto would have responded to such a fatwa?  She was a Muslim woman and served twice as the Prime Minister of Pakistan (1988 – 1990; 1993 – 1996).    Sadly, she was assassinated on 27 December 2007, after departing a PPP rally in the Pakistani city of Rawalpindi, two weeks before the scheduled Pakistani general election of 2008 in which she was a leading opposition candidate.

Benazir Bhutto is not the only Muslim woman who stands out as a trailblazer for Muslim women around the world.  In 2007, 10 female Muslim executives are cited by Forbes as among the world’s most powerful women.  Going further back, Muslims worldwide are very familiar that the Prophet’s (PBUH) first wife, Khadijah, was an astute businesswoman.

The recent ruling in Saudi Arabia has made me wonder what exactly is a fatwa?  According to Wikipedia, a fatwa is a religious opinion concerning Islamic law issued by an Islamic scholar. In Sunni Islam any fatwa is non-binding, whereas in Shia Islam it could be considered by an individual as binding, depending on his or her relation to the scholar.

It seems to me that if a fatwa is a religious opinion and in Sunni Islam (which Saudi Arabia follows) is non-binding, then perhaps there can be a glimmer of hope and optimism.  I see the fatwa more as a recommendation rather than a law.

My analysis of the fatwa is that the conservatives of Saudi society are not ready to see women as cashiers.  The majority of grocery store cashiers in Saudi Arabia are foreign nationals from Pakistan and India.  A minority are from other Arab states or even young Saudi men.  As such, a position as a cashier for a Saudi woman is likely viewed as demeaning and beneath her by mainstream society and not so much as a position which will attract men.

In my own view I think that stating the need for segregation and sheltering women from men has become more of a standard litany than a reality.