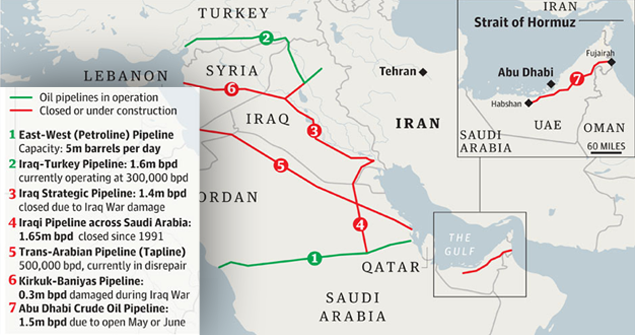 What’s the story? The 10bn AED Habshan-Fujairah pipeline opened this week, and is now transporting up to 2 million barrels of oil per day from Abu Dhabi to the country’s most eastern port.

I can’t believe you’re making me read a story about a pipeline! Yes, but it’s not really about the pipeline is it… It’s about the reasons for the pipeline, and the ramifications of it.

Ok, go on? In one step the UAE, and in fact the whole world, has reduced the risk of Iran closing the straight of Hormuz, something it has threatened to do continually, thus choking the world of a significant supply of oil, and the UAE its income. The Iranian threat has been, while not completely, significantly neutered.

And the ramifications? In the short term it’s likely to increase the already high levels of distrust between the UAE (and Gulf in general) and Iran. Relations are already messy: Take the Shiaa/Sunni divide, add disagreements over OPEC strategy, stir in Iran’s occupation of the Abu Musa islands, let it simmer before adding a pinch of polarising unrest in Bahrain and Yemen and you have the recipe for a further souring of relations between the countries.

So why do it? As we said, a guarantee of income, and to neuter the Iranian threat. The cost of moving – and more importantly insuring – the transportation of oil will also be reduced. From a particularly UAE perspective, the pipeline speeds up economic progress outside of Abu Dhabi-Dubai-Sharjah. Spreading the wealth to poorer emirates has been very much policy since the onset of the Arab Spring.

Any response from Tehran? Silence so far. Iran may well be kicking itself for getting itself into this position: Its threat of choking the Straight of Hormuz has backfired.

“It will show Iran that the countries of the region will not take its threats lightly and that they have the means to reduce the damage if ever it occurs. It is also an invitation to Iran to follow a cooperative policy rather than force other countries into expensive means to deny Iran the possibility of threatening their exports.”