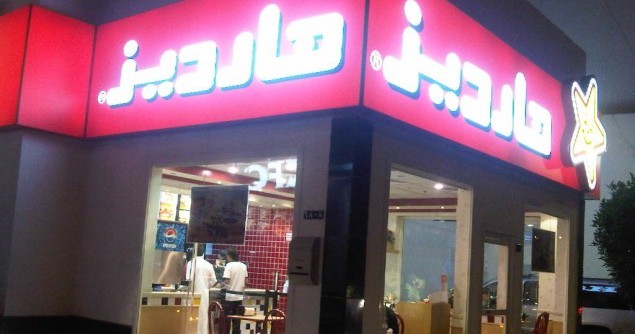 There is a saying that I hear all the time in Saudi Arabia as far as progress goes:   “One step forward and two steps back.”  So it comes as no surprise that a conservative Saudi cleric has made headlines with an outrageous tweet he posted this week regarding Saudi women in the workforce.

Global hamburger chain Hardees, which has operated in Saudi Arabia since 1981, tiptoed into KSA’s modern age by becoming the first restaurant chain in the country to hire female waitresses in several of its Jeddah locations.  While many other Saudi residents and I applaud this move, Sheikh Ali Al Mutairi has called for a boycott of the fast-food chain and has voiced his own opinion via Twitter:  “At the beginning of her shift she’s a waitress. When her shift ends she becomes a prostitute. The more she’s around men the easier it becomes to get closer to her.”

Basically, in Al Mutairi’s mind, all working women are whores.

Not only is his statement insulting and degrading to women everywhere, he unfortunately perpetuates the notion that women are only looked upon as sexual objects in this society and that Saudi men are not expected to be able to control themselves at the sight of a shapeless veiled woman flipping burgers.  Although Al Mutairi has his fair share of ultra-conservative supporters (one tweet congratulated him for being  “a splinter in the throats of liberals”), the sheikh’s tweet has ignited outrage among many in Saudi Arabia who claim that his stance is offensive and treads in dangerous waters according to the teachings of Islam, by commonly labeling these women as prostitutes without having any proof.

Saudi Arabia’s oil-driven economy has remained fairly strong amidst worldwide financial turmoil, but as prices have steadily risen these past few years, many families have felt the pinch.  A large chunk of Saudi Arabia’s work force consists of foreign workers, who are not only hired in practically every field of work there is, but also dominate those lower paid positions which are traditionally considered beneath Saudis, such as all hard labor jobs, restaurant workers, street sweepers and garbage collectors.  Even though the number of highly educated Saudi women exceeds that of Saudi men, the number of Saudi women who actually work outside the home remains dismally below that of men.  Added to that is the fact that women in Saudi Arabia are still prohibited from driving, and the country must import foreign male drivers to chauffeur around the half of the population crippled by this nonsensical and costly policy.

When I first moved to Saudi Arabia in 2007, women were mainly allowed to work in only two fields:  education and medicine.   No women were allowed to work in sales, forcing women to purchase personally intimate items such as cosmetics, perfumes, bras, panties, and sexy lingerie from men.  In a society where there is strict gender segregation, and where women must wear loosely draped black outer cloaks and scarves covering their hair, and where many women even veil their faces, placing a Saudi woman in a situation where a salesman would suggest she needed a D-cup instead of a C was as ludicrous as it was humiliating.   A well-executed campaign by Saudi women against this preposterous policy caused a change in the law, and this past year saleswomen in cosmetics and lingerie shops have popped up in malls everywhere.  There was also a religious backlash when leading Saudi supermarket chain Hyper Panda hired female cashiers a couple of years ago, but that uproar has since died down and female workers have become a common sight in supermarkets.

So in a place where social change is notoriously slow and even considered backward, there has been an undeniable and remarkable amount of progress for Saudi women in the five short years since I moved to Saudi Arabia, thanks to the leadership of the cautiously progressive champion of women’s rights King Abdullah.

But calling female employees at Hardees Restaurants “prostitutes” illustrates the type of Saudi male and religious mentality that Saudi women are up against.  I read several news reports and blog posts about the Hardees tweet, and the comments were disheartening and horrifying to me.  This type of incident just opens up Saudi Arabia as a whole to ridicule by the rest of the world, making targets of hard-working Saudi women who just want to help support their families, and serving to reassure those who are anti-Muslim, anti-Saudi, or anti-Arab that they are justified in feeling the way they do. Why do these religious clerics continue to supply fodder/ammunition such as this to these haters?  Wouldn’t there have been a more politically correct and appropriate way of stating his point of view without slandering these female employees as outright “prostitutes?”  Is it better/safer for women to beg in the streets here instead of holding down an honest job?

I’ve lived here in this country long enough to realize that Saudi Arabia could care less about what the rest of the world thinks of them and their ways.  But I also know that there are many in Saudi Arabia who want more for their wives, sisters and daughters and who are patient that change is slowly coming.

We try not to eat that much fast-food any more, but I’m going to talk my hubby into taking me to Hardees for lunch or dinner soon, hopefully one where there is a female behind the counter to take my order. If you live in Saudi Arabia, please show your support for Hardees and for Saudi women by taking your family out for a meal at Hardees – and help ensure that Saudi Arabia continues to move forward instead of backwards

One Response to Women ‘Making Inroads’ Into Saudi Workforce. Slowly.