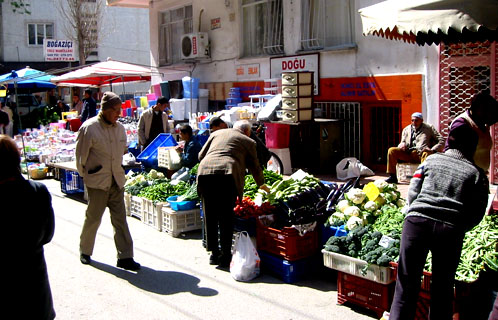 The Old Town in Antalya, Turkey, at dusk in this resort city on the Mediterranean coast is filled with hawkers selling jewelry, clothes and souvenirs. Shopkeepers easily transition from speaking Turkish to Russian, Polish and German as they spy tourists tentatively approaching their shops. Yet Hebrew, once among the languages mastered by bazaar sellers, is virtually non-existent.

The annual number of Israeli tourists to Turkey has always been modest. However, resorts and shop owners recognize the potential for a greater Israeli presence on the beaches and in hotels. Israeli tourism to Turkey remains a fledgling enterprise, but the worsening diplomatic crisis between the two countries has damaged the progress made in recent years to attract more visitors.

Whether Turkey can attract Israeli tourists to at least 2009 levels is the “million-dollar question,” Danny Zimet, spokesman for Turkey’s tourism ministry office in Tel Aviv, says.

“Turkey as a tourist destination is disappearing because of the constant problems between the two countries,” says Zimet, who is also a senior fellow at the Center for International Communication at Bar Ilan University at Ramat Gan.

Zimet says that a record number of 560,000 Israelis visited Turkey in 2008. Turkey and Israel enjoyed warm relations until Israel launched its Gaza campaign against Hamas in December 2008. A month later, Prime Minister Recep Tayyip Erdogan stormed off the stage at the World Economic Forum in Davos after declaring “you kill people” following a heated exchange with Israeli President Shimon Peres.

The very public confrontation had a chilling effect on the Israeli and Turkish tourism industries. Israeli tourism to Turkey fell dramatically to about 300,000 visitors in 2009. Zimet says the number of Israeli tourists to Turkey further dropped to 110,000 in 2010. The numbers decreased again to about 62,000 between January and August of this year.

Relations between the two countries reached a breaking point when Israeli commandos killed nine people aboard the Mavi Marmara in May 2010 as the Turkish-flagged ship attempted to break the Israeli blockade at the Gaza Strip. The United Nations later determined Israeli armed forces used “excessive force,” but commandos also faced an “organized and violent resistance” from members of the flotilla.

Last month, Ankara expelled the Israeli ambassador and terminated all bilateral military agreements after Israel refused to apologize for the Mavi Marmara incident.

Indeed, bilateral trade relations between the two countries appear to be untouched by the crisis. “There has been no clear impact on civilian trade,” Zimet says.

While the loss of Israeli tourists in the resort cities of Antalya and Alanya appear to have minimal impact on the local economies, their absence has not gone unnoticed. And whatever animosities between the two governments, the tension has not interfered with local commerce.

“We don’t get many Israelis here, but we always welcome their business,” says Mustafa Saydam, who hawks day tours for Pacho Tours on the sidewalk of Ataturk Street in Alanya.

“Politics is politics,” Saydam says. “It has nothing to do with showing people how to have fun.”

Zimet agrees. “From my personal perspective of Turkey and what I am hearing from my colleagues, there is no obvious change [in attitude toward Israelis] in the civilian population of Turkey,” he says. “The Turks don’t have the same feelings as their president expressed.”

An Israeli-Arab citizen vacationing with his family at Antalya’s Club Hotel Sera luxury resort says the city has been his destination of choice for the past five years. The man, who spoke on the condition that his name not be published, said he has not come across any problems. “I am always treated well here, although I am not Jewish and I cannot speak for Israelis. But even so, like any tourist place, doing business crosses all cultural and religious lines.”

But what is Israel’s loss may be Turkey’s gain. Turkey’s tourism ministry recently announced that an estimated 1.4 million Arabs visited Turkey so far in 2011, a jump from about 912,000 in 2009.

Mehmet Habbab, chairman of the Turkish-Lebanese Business Council, told Agence France Presse recently that he expects the number of Arab tourists to hit 1.7 million by the end of the year.

Part of the trend for Arabs to visit Turkey is the growing popularity of Erdogan in Gulf countries for his hardline stance over the Mavi Marmara incident. The success of wildly popular Turkish soap operas, long a staple on Arab television, has attracted more Arabs to Istanbul to visit the city’s sites. Traditional Arab tourist destinations like Egypt, Tunisia, Bahrain and Syria are in upheaval. Turkey provides an alternative.

In addition, the Turkish tourism ministry reported that an estimated 1.2 million French tourists traveled to Turkey from January to September in 2011, a 45% leap from the same period in 2010. France now ranks sixth behind Germany, Russia, Britain, Iran and Bulgaria in the number of tourists visiting Turkey.

Zimet says that despite the crisis Tel Aviv’s Turkish tourism office “has no intention of closing its doors.”

“Slowly, Israelis will be drawn to Turkey,” says Zimet. “Despite boycotting Turkey now, it’s still attractive. Israelis will come back once there is a better political atmosphere and a practical way to get there.”