The Destruction of Casablanca By Construction 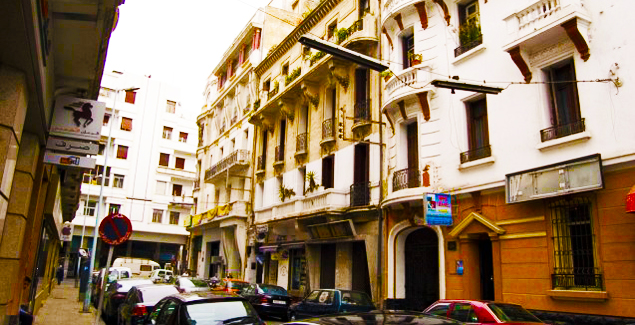 When the French seized Casablanca in the early 1900s, they turned the historic Moroccan port into a classic of colonial architecture. In the decades since real-estate development and property speculation have reshaped the cityand preservationists are increasingly fretting about what will become of the crumbling French colonial facades, neo-Moorish details and Art Deco hotels.

“We’ve got to act fast,” said Karim Rouissi, vice-president of Casamemoire, an association to protect the city’s old buildings. “There are buildings that are in a state of advanced disrepair.”

Among the casualties is the famous Piot-Templier building. It was constructed in 1925 by architect Pierre Ancelle and was alongside the Hotel Lincoln. It housed the well-known Templier china shop and upstairs, the famous restaurant Etoile de Marrakech.

Casamémoire reports that many culturally-important buildings are being destroyed to make way for yet more concrete block constructions, and they describe this is as very short-term thinking. Many Casablanca buildings have met the same fate as Piot-Templier – schools like the Ibn Tofail college, villas such as the important Villa Cadet in Oasis, and factories such as Hamelle, while others are in danger of imminent destruction.

It seems odd that on the one hand, the authorities seem to recognise the importance of the rich cultural heritage of Casablanca by deciding to retain the Bessoneau building (Hotel Lincoln) and yet on the other, approve the demolition of Piot-Templier. And all this while the application for recognition of Casablanca as a UNESCO World Heritage Site is being considered.

The old Lincoln Hotel is another case in point. Created in 1916 by the French architect Hubert Bride a few metres from the central market, the Arabesque Art Deco building was used by American spies during World War II.

The hotel closed in 1989 and today is in ruins, with only its facade surviving though this too is breaking apart.

Rouissi says much of Casablanca was built as an experiment in early 20th century urban planning and today there are about 4,000 buildings in need of help.

Real-estate developers often look to buy historic properties, tear them down and build more modern apartment buildings through which they can charge higher rents and recoup expenses.

Part of the problem, Rouissi said, is that tenants in existing apartment buildings pay very low, fixed rents and landlords are only able to remove tenants if they pay a hefty relocation cost of about 50,000 euros ($66,000).

Developers have been known to have a cosy relationship with local officials and building demolitions are sometimes rubber-stamped.

“Rebuilding is done at the expense of the city and its heritage,” said Rouissi, whose association is hoping Casablanca will be ranked as a UNESCO (UN Educational, Scientific and Cultural Organization) World Heritage Site.

Though local authorities have been slow to act in the past and there is no national strategy to preserve architectural heritage, they are becoming more responsive to preservationist pleas, Rouissi said.

Some of the city’s rapid redevelopment can be seen along the Boulevard Mohamed V, one of the city’s oldest roads. Today, much of the street has become a construction site for a future tram line, though architecture buffs still flock to the area to look at old buildings.

In the historic town centre, a short distance from the ancient medina, or old Arab quarter, the famous Excelsior Hotel has become one of the hippest cafes in Casablanca, a diverse city of about five million residents and the beating heart of Morocco’s economy.

The Excelsior is adorned with a whitewashed colonial facade, built by French architect Hippolyte-Joseph Delaporte in 1916 and decorated with Spanish tile.

Across the road is the main entrance to the medina, the ancient city where Jews, Muslims and Christians co-existed for years, where an old Catholic church is today being converted into a cultural centre.

2 Responses to The Destruction of Casablanca By Construction