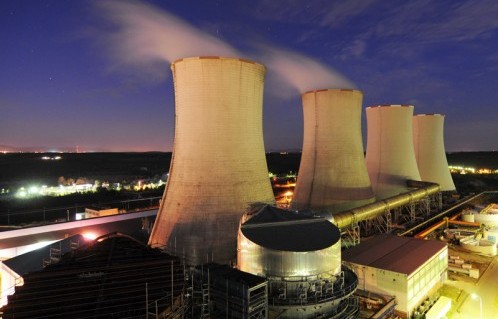 Electrical energy demand is growing by 8% per year, according to the piece. That demand cannot currently be met by any existing solar technology. The Saudis could burn gas or oil to produce electricity, but that would be at the cost of marketing those fuels abroad, where they would claim much higher prices.

The signing of agreements with an array of countries suggests—to me, at least—the the Saudis are looking for broad experience in planning for their own nuclear plants as there are no other countries with nuclear power that have the same challenges as the Kingdom.

Sites for potential reactors strike me as particularly complex. There are certainly vast areas where a plant could be constructed away from population centers (and the Saudi media’s coverage of the aftermath of the Japanese earthquake and tsunami certainly make that particular facet a matter of public concern: See: Japan ups nuke crisis severity to match Chernobyl).

But cooling nuclear plants, notoriously thirsty for vast amounts of water, is another matter. The country has already expressed its concern about the possible effects of an Iranian plant on the Gulf littoral. The Red Sea coast, which is seismically active, doesn’t look like a great location either. As best I can figure, that leave the Empty Quarter, with significant deep aquifers as a most likely site. Needless to say, that location brings its own difficulties.

Saudi Arabia on Monday announced its plan to sign a nuclear cooperation agreement with China. The Cabinet said it has authorized Hashim Yamani, president of the King Abdullah City for Nuclear and Renewable Energy, to hold talks with Chinese officials to reach a deal for peaceful use of atomic energy.

The new move comes after the Kingdom signed its first ever nuclear treaty with France in February. Yamani, who signed that agreement, said it would pave the way for the Kingdom’s long-term plans to build power stations utilizing alternative energy sources to produce electricity and water. The agreement allows the two countries to cooperate in the fields of production, use and transfer of knowledge regarding the peaceful uses of nuclear energy.”