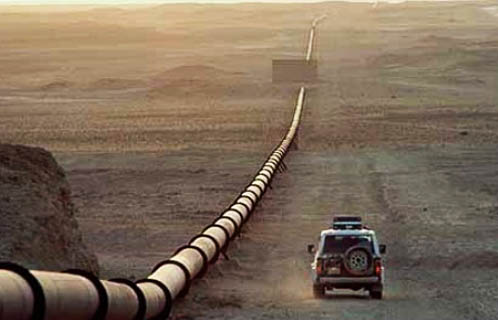 The British daily The Guardian, in its continuing reporting on WikiLeaks, runs a piece in which a Saudi questions whether Saudi ARAMCO has been truthfully reporting its oil production potential. This has led to a flurry of coverage from both environmental and ‘peak oil’ prognosticators, as well as those who just like bashing Saudi Arabia.

The US fears that Saudi Arabia, the world’s largest crude oil exporter, may not have enough reserves to prevent oil prices escalating, confidential cables from its embassy in Riyadh show.

The cables, released by WikiLeaks, urge Washington to take seriously a warning from a senior Saudi government oil executive that the kingdom’s crude oil reserves may have been overstated by as much as 300bn barrels – nearly 40%.
…

I’ve got some problems with this story…

First, I cannot find the cable itself at any of the sites mirroring WikiLeaks. It’s not on the WikiLeak.org site, either. Without seeing the text of the cable, it’s hard to assess its worth. I note that the Saudi source, Sadad al-Husseini, was a former Saudi ARAMCO employee—not, as the article state, an ‘official’. How long ago did al-Husseini leave his position as head of exploration?

The cable itself, The Guardian says, dates back to 2007. What was the context of the meeting at which the issue was discussed? Who was the American reporting officer? The article says ‘Consul General in Riyadh’. The Consul General in Riyadh is responsible for, well, consular affairs, that is, visas and the like. The embassy in Riyadh has an Economics Officer whose brief is Saudi oil. Is the reporting officer competent to assess al-Husseini’s comments? There’s also a Consul General in Dhahran, next to ARAMCO, whose entire office has Saudi ARAMCO within its brief. Why didn’t the cable come from there?

You could assume that someone in the Economics section looked at the cable before it was sent, but with the rapid turnover of officers that was going on in 2007—six-month tours of duty—I’m not sure of it.

In sum, I really do want to see the full cable. If any readers find a link to it, I’d appreciate your passing it on.

UPDATE: I’ve yet to find the full-text cable, but commenter ‘Balqis’ sent a link which in turn linked to this piece from Wall St. Journal:

At first glance it looked like a story to shake the world: the WikiLeaks cable suggesting Saudi Arabia’s oil reserves -– the most bountiful on the planet -– may have been overstated by 40%.

It opened the door to a future in which oil would be depleted far more quickly than anybody believed -– raising the threat of sky-high prices and cut-throat competition for scarce resources.

But a conversation this morning with the man whose comments set off the furore revealed a Chinese-whispers chain that ended up giving the apparent imprimatur of the U.S. diplomatic service to a misunderstanding over oil figures.

The story starts back in 2007 when U.S. diplomats had a chat with Abdullah al-Saif, head of exploration at Saudi Arabian Oil Company, commonly known as Saudi Aramco.

He told them that the kingdom had 716 billion barrels of oil –- a figure that would rise to 900 billion in about 20 years.

Enter Sadad al-Husseini, a predecessor of Mr. al-Saif as Saudi Aramco’s exploration head, and pretty much the only company insider ever to speak in public. In the past he has been skeptical of some Saudi forecasts on how much oil it can pump and is regarded within the industry as a careful, knowledgeable man.

Asked by the American diplomats what he thought of Mr. al-Saif’s statements, he made what appeared an extraordinary statement: that the reserves figure was inflated by 300 billion barrels. Deducting that figure from the 716 billion barrels created the idea that Saudi reserves were 40% less than it officially said.

As it turns out, however, Mr. al-Husseini’s memory of that conversation is rather different.
…

And here is the cable. I see no reason to question Mr al-Hussiein’s later remarks…