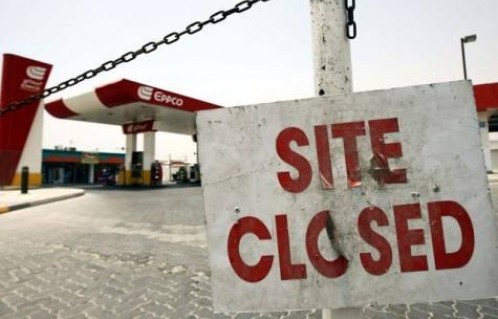 We are blessed in Northern Sharjah in that we are surrounded by ADNOC and Emarat petrol stations – the closure of every EPPCO and ENOC station in the Northern Emirates has hitherto had no practical affect on our lives.

Until I left Dubai yesterday with no petrol. I didn’t realise until we’d hit ‘murder mile’, the road that links Dubai to Sharjah. We had travelled 30km with the petrol light on (I always zero the trip when it comes on so I know I’ve got 30km to get petrol in), which was not good news. I have once travelled 32km without petrol but I’m far too scared of running out to ever push it further than that.

There are two reasons why running out of petrol is a major fear factor. My first, and principle, reason is that I could never live with myself for running out of petrol whilst driving in one of the world’s major oil producing countries. The second is that running out of petrol means getting a taxi and then finding an open petrol station. Now, in the UK I know they all sell nice red fuel cans. I have never seen one on sale here and don’t know where I’d get a suitable container from. I’ve seen petrol sloshed into all manner of odd containers at petrol stations, but I’ve never seen an actual petrol container used. The prospect of having to dance around trying to find a spare container at least marginally fit for purpose doesn’t fill my heart with stuff.

I have only run out petrol once before in my life, and that was on purpose. The publishing company I worked for in the mid-eighties had gone bust following an acrimonious boardroom putsch and The Evil Receivers had demanded the prompt return of my company car. They got it too – empty from driving around the building and coasted nicely to its parking spot after the engine had died. (I still have the cheque for 67p from them in settlement of hundreds of pounds of outstanding expenses).

Of course, southern Sharjah is the land of EPPCO and ENOC. Driving around, pricked by increasing desperation I started to realise just how this whole closure thing must be hacking a load of people off – the odometer kept ticking as we tried to head towards where we knew there was an Emarat station (but which I had no hope of reaching before the inevitable cough of a dying Pajero was heard). 34km, 40km and by now my hands were sweating. I have never seen so many EPPCO and ENOC stations in my life. They seemed to be around every street corner. And then, at last, at 43km, an Emarat station hoved into view, with cars cascading down onto the street as they queued and jostled for fuel.