Qatar 2022 World Cup A PR Boon, But Little Else 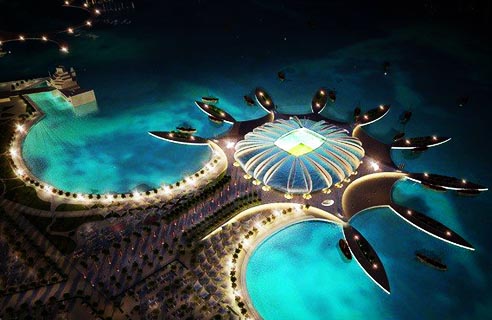 The tournament’s public relations value is a no-brainer. Hundreds of thousands of visiting fans and millions of television viewers will put Qatar in the global spotlight for a whole month. The energy-rich Gulf state will be able to showcase its shiny, state-of-the art infrastructure and facilities. In doing so, Qatar will become the face of an Arab world that projects itself as rich, bold and futuristic – a dramatic contrast with current perceptions of a world wracked by conflict, repression, violence and conservatism.

Investors anticipate that Qatar’s elevated status will translate into significant economic gains. As a result, the Qatar stock exchange has increased by more than seven percent in value since the December 2 FIFA announcement that Qatar had won the 2022 bid. Investors may find that their projections were overly optimistic.  Granted, experience teaches that the actual benefits of hosting a World Cup never match expectations and that more often than not the cost of hosting outweighs the benefits.

An analysis of the economics in the case of Qatar shows however that there is virtually no Qatari benefit in any of the categories in which benefit is measured, including investment in productive infrastructure that yields a return long after the tournament is over, opportunities for local companies in developing  infrastructure, a boost to tourism  and  related industries such as hospitality and air transport, job creation and increased wealth for the local population as a result of secondary expenditure in the economy. “Numerous studies exist on the  economic impact  that  a country  or city can expect  for hosting  international sporting  events and  the  results are  generally not very encouraging for Qatar,” says Citibank’s chief economist for the Middle East, Farouk Soussa, in a recent research note.

Despite reports that Qatar expects to invest a whopping $50 billon into creating the infrastructure for the Cup, Soussa concludes that actual investment exclusively related to the tournament is likely to be at most $10 billion and probably far closer to $4-5 billion. That money is primarily for the stadia and accommodation of visiting fans. It is a drop in the bucket compared to the $250 billion in ongoing projects in Qatar.

Qatar was already developing much of its infrastructure such as the $15 billion upgrade of its airport, a light railway, new roads, a bridge linking Doha to Bahrain and increased hotel capacity prior to and independent of its winning the right to hold the 2022 World Cup. Of the $250 billion, $94.5 billion is for infrastructure, $70 billion for oil and gas, $53 billion for real estate, $19.5 billion for power and water, $11 billion for petrochemicals and $6.7 billion for industry. Put differently, World Cup-related investment will increase Qatar’s overall investment over the next decade by at most four percent. From an investor’s point view that’s not much to get excited about.

By Qatar’s own admission, it will be developing countries rather than the Gulf state which will reap the long-term benefit of the stadia Qatar will be building. That is because the stadia will be taken apart after the 2022 World Cup and donated to countries that would benefit from them. That makes perfect sense, given the experience of the current Asian Cup games in Qatar, in which the stadium is at best half full.

Similarly, the World Cup is likely to leave Qatar with a significant surplus in unused hotel beds. Assuming that Qatar attracts 310,000 visiting fans as did South Africa did last year, Soussa calculated that based on an average stay of 18 nights with two people to a room the Gulf state will need to have 90,000 hotel rooms. That is three times more than Qatar had planned as it won the World Cup and ten times the number of room currently available. Average room occupancy in 2009 with 8,500 rooms available was according to the Qatar Tourism Authority 50%. With other words, Soussa argues, Qatar will have to increase hotel occupancy 15-fold to achieve a 70 percent average occupancy rate once the 2022 World Cup is over. That could prove to be a tall order.

Finally, the World Cup will primarily create jobs for transient foreign workers rather than Qataris and produce contracts for foreign contractors who will be importing their building materials. Already foreigners fill nine out of ten jobs in Qatar. As a tax haven, Qatar will moreover reap no benefit from the increased economic activity. As a result, the multiplier effect that normally is expected to increase the wealth of a local population is not applicable in Qatar.

The bottom line is that the upside for Qatar of hosting the 2022 World Cup is likely to be less tangible than immediately meets the eye. That is not to belittle the significant public relations impact that Qatar and with it the Arab world will achieve and that it would not have been able to secure no matter how expensive a PR campaign it would have launched. In many ways, hosting the World Cup is in PR terms similar to Qatar’s launch in 1996 of the Al Jazeera television network that radically changed the Arab media landscape and put the Gulf state on the map in a way public relations never could have.