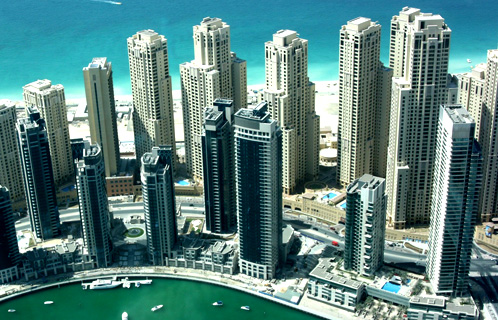 Haven’t we heard this before: Yes, since 2008. It’s not really news. That said over the last six months analysts have been talking about a stabilization of prices, this is a bit of a dampner on any premature exuberance. The number of residential deals tumbled to 1,459 in the quarter, down from 2,648 in the year-earlier period.  Earlier this week Arqaam Capital predicted property prices in the may drop a further 20 percent this year.

What’s causing it? Too much supply, not enough demand.

That’s very helpful. Any more detail? Yes, the property boom in the UAE was driven by speculation. The only buyers now are those that actually want to live in appartments or villas, and no one likes negative equity.

Surely if no one is buying, rental yeilds should pick up – people have to live somewhere? Not if there are too many properties on offer.

Is this ever going to end?  33,000 new homes expected to hit Dubai’s market by end-2012, and there are already too many vacant appartments and to a lesser extent villas. The UAE would have to have to have another boom to mop up that level of demand, and that’s unlikely to happen against the backdrop of the world’s financial crisis. Some models talk about 7 year cycles for property, which means a turning point about 2015, but frankly who really knows.

Any bright spots? Yes, your property will depreciate more slowly if you live in more established and developed areas. Like Palm Jumeirah.

Great. Any really good news? Well, for some this is good news. Dubai is a cheaper place to live and work. The trend for businesses to move out because of the rising cost of living is in reverse, One person’s pain is another person’s gain. There’s a silver lining in every cloud, etc, etc.