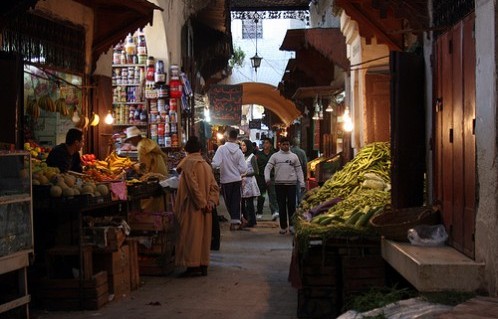 The souk or open-air market, has for centuries been an integral part of any cultural discourse in the Middle East and the Muslim world in North Africa. From Muscat in Oman to Fez in Morocco, the souks have also attracted the Western tourist hungry for bargain deals on carpets, delectable ethnic wares, or simply a slice of life in “exotic lands.”  The “Arab Spring” has had an impact on tourism and now the souqs are  suffering. However, the problem may be deeper than that as the the investment website Thomas White pointed out in a published a “postcard from Morocco” which highlighted the plight of the souks. Here is an edited extract:

Morocco has had a rich souk culture because of its appeal to both the Western tourist and the local consumer. Geographically, the nation is not just a place where Africa meets Arabia, it is also close to Europe and, therefore, highly cosmopolitan. And, thanks to the French influence on the country, souks in Morocco have always offered sophisticated or discerning tourists more upscale goods, such as Berber rugs with intricate patterns or modern kaftans.

For Moroccans, souks have historically been a way of life. These are places where they have always met to exchange gossip and buy goods in bulk. In fact, a survey conducted in January reveals that 51% of Moroccans purchase their groceries in large quantities in order to save money. Unfortunately, this is one factor that is now working against souks in the country. With bulk-buying consumers increasingly shifting to modern retail channels and supermarkets, and malls mushrooming throughout the country, profit growth has been slowing for businessmen operating in souks.

So, much like the repeated discounts offered on the lacework in that iconic scene from Casablanca, the Moroccan souk is losing currency these days because of a retail boom in the country. The trend is expected to worsen in the future as Morocco’s retail sector, which accounts for approximately 13% of the country’s GDP, is projected to grow 5% a year. Domestic supermarket players are now firmly entrenched in the country, while foreign firms are expanding rapidly. For example, the no-frills, low-cost Turkish supermarket chain BIM has plans to expand its store network from 45 to 150 by next year. Since it sells discounted bulk items, BIM is expected to do well in the country.

Local player Aswak Assalam is also growing its supermarket and hypermarket network. The company now has 11 outlets and it plans to open at least two new ones every year. Some of the other major retail firms that are growing in Morocco include the owner of convenience store chain Hanouty Group and supermarket chain Marjane Holding. Locally-owned Label’Vie has partnered with Carrefour, the world’s No. 2 retail company in terms of revenue, to run Morocco’s first Carrefour hypermarket. French firms such as Galeries Lafayette and Fnac are also planning to set up shop in Morocco.

Having always been a part of Morocco’s cultural ethos, the souk clearly had not bargained for this dramatic change in consumer habits. Perhaps it is time for the souk to market itself better and give Moroccan consumers the hard sell.