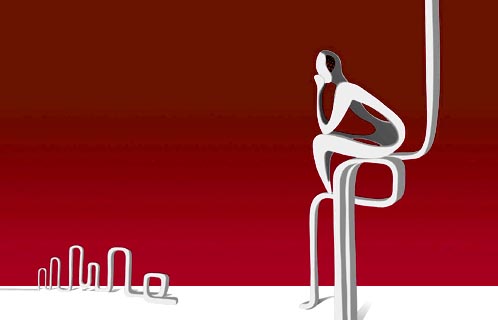 I recently asked a friend with a significant number of followers on twitter why he almost never tweets about the politics of the Arab Spring. He said he didn’t think political commentary made the Arab world a better place. He also thought commenting on the political developments while they were developing was more of a guessing game than anything else. I asked him what he thought was worth tweeting and he said: the state of people, not their politics.

At a recent literary event, I asked an Emirati anthropologist what he thought of this socio-quad theory: Key players in a society are the government, the private sector, the intelligentsia and the broader public. The proposed argument was that intellectuals go to great lengths in noting where (wo)men of power and wealth continue to fail society conveniently ignoring that the fact that those civil servants and business(wo)men are products of that very society. In other words, if one was to consider their government essentially bureaucratic and their merchant class largely un-patronising, they really should consider their society as a whole in a similar light.

What the anthropologist had to say is irrelevant. What is relevant is how often we shy away from the core issue. We might stumble upon a reformist health minister here and a benevolent businessman there, but the reality is one cannot be near as critical of a child’s misbehaviour as they should be of their parents’ condoning of that behaviour; making excuses for their child’s failings or even shying away from noting them while marvelling at their random interims of promise.

Maryam Amiri’s Parents seek prestige but we still want our dream jobs – published last year in a local English newspaper — captures a very powerful manifestation of that issue. Amiri explains how Emiratis she knew while growing up who wanted to become ‘directors, cartoonists, veterinarians, fashion models, professional football players and teachers’ ended up as well-paid public servants because their parents convinced them the security and glamour of a government job was worth sidelining those dreams.

The narrative of the intelligentsia in the GCC continues to be high brow, nestled and very much domiciled in ivory burjs (towers). If anything, those hashtaged tweets and furious Facebook groups should recognise that there is another march due on those Fridays: the lunch march. This evolution begins at home sir, on the table ma’am; it drizzles between your mother’s meat and the bread your father just bought on his way back from his prayer.

In the wake of the GCC’s Peninsula Shield involvements in Bahrain and the subsequent hopeful rumours of a Gulf confederacy, I see several tweets a day about the resurgence of a Gulf identity and how our union is our salvation. But frankly, the naivete of it all baffles me. On one hand, I can appreciate its hopefulness fuelled by the combination of 1) a genuine realisation that, for all its wealth, the GCC is a second-rate bloc and 2) a nostalgia of the not so distant past when Gulf societies, emboldened by a spring of cultural
production dared to dream.

On the other hand, this realisation doesn’t seem to recognise the very real political, economic and social impediments to those lofty aspirations. While the threat of an expansionist Iran seems to be a successful rallying point for many these days, it is hard to see how a confederate GCC could counter Iran more effectively than building on the current high-level coordination between the states. In other words, if the GCC was to attempt a union aka EU it should be based on a broader set of drivers; namely, economic.

But just as GCC governments must learn to realign their interests together, the Khaliji (Gulf) people must rediscover each other before attempting such a pact. Last Monday, a Jeddah-based friend I knew from college called me and after talking about Khaliji social integration he invited me, and some friends, to Jeddah to reconnect. Before ending the call he noted that coming from Jeddah, studying in Dubai gave him the opportunity to meet other Khalijis and really get to know them. It is those ties between Khalijis that
must be re-forged and the regional fabric that needs to be re-knit before such a union can be successfully attempted. This is not to say that GCC states entering a confederacy in the near term wouldn’t be met with populist approval. On the contrary.

However, I think it would be similar to the United Arab Republic project in the sense of how there was little cultural assimilation between the citizens. It is in this capacity that the intelligentsia can have a real impact at improving the social state of those affairs. At the end of the day, nations are made of people and the strongest of unions and most stable of institutions are the ones who command their people’s active, not passive, support. And so we must reform the grand institution that is society before any other sub-institution.

I find the intelligentsia’s capacity to continue to lament public sector failings and private sector irresponsibility towards society when they continue to fail at building a relation with society’s broader public — an audacious contradiction. As long as one is a shepherd, (s)he cannot be a champion of the cause of another’s herd.

Until public intellectuals realise that they commit the very failings, which they so fiercely criticise the public and private institutions for, societies will continue to view them with as much distanced alienation as they view the former two groups.

What we need is an intellectual evolution of enlightenment not a political revolution against government.

One Response to GCC Thought Leaders: Step Up and Connect