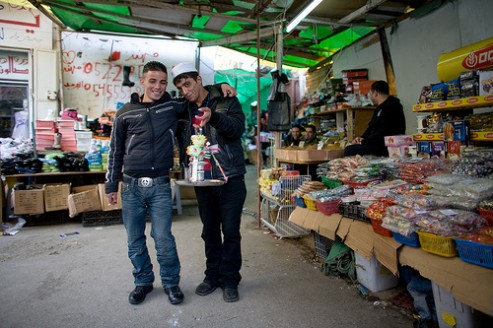 Arab youth confront daunting challenges, including a lack of economic opportunities, constraints on their freedom of expression, and the complex and shifting nature of their own Arab identity. How the Arab world meets these challenges will have significant ramifications for the Middle East and the world. This special panel discussion marks the release of America Abroad’s three-part public radio series on youth in the Arab World.

Moderator Deborah Amos, foreign correspondent of NPR News who has covered the Middle East extensively, started by saying that as a reporter in the region you notice the young population, but most of the people she interviews are usually over 30. “If you overlook this generation, you miss something essential about the Middle East,” she said.

Marc Lynch, aka Abu Aardvark, Director of the Institute for Middle East Studies, George Washington University, believes that one thing is clear: sheer magnitude of the crisis facing youth in the Middle East. Lynch said many in the West focus on a small group of activists and bloggers, but miss the silent struggle of tens of millions of people. Those people are and their issues are also ignored by their own governments, who seem to think that as long as they can keep these young people off the street then they are doing a good job. Lynch said the recent events in Tunisia and Algeria is particularly interesting because it could have a domino effect all over the Arab World. But when it comes to political ramifications of these events, he wonders if it is going to lead to a substantial change in policy, or just to more repression and bloodshed. This kind of spontaneous uprising and dissent has no place to go because there are not political or social movements involved in it. Lynch said the greatest single thread that combines what is happening in the Arab World right now is the failure of the system to deal with systematic problems, as well as the failure of outside intervention plans. “The tools we have might not be appropriate, and the dynamics are don’t look familiar,” he said. “It’s exciting and troubling.”

Christine Capacci-Carneal, is the Education Development Officer of USAID, and she works primarily with USAID-funded programs in Egypt, Jordan, Lebanon, Morocco, West Bank/Gaza and Yemen. Based on her experience in youth development programs, Capacci-Carneal said that youth are a sophisticated group with many subgroups, and that’s why a problem-based approach is less effective than a comprehensive approach. “Problem free is not fully prepared,” she said. As an example for working with that approach, Capacci-Carneal talked about Youth:Work Jordan, which tries to engages youth directly, but also tries to solve systematic issues by targeting youth in poor districts and working with local organizations. She commended the efforts of the program, but admitted that one of the problems they faced is that they have had a hard time building political will and institutional capacity to sustain that effort. Other challenges facing such programs include how to address building a stronger youth voice and a stronger sense of identity then let local organizations join in that effort. Also, how do ensure that your using the available funding efficiently? Capacci-Carneal said USAID is working to develop better research tools to know what works best.

Lina Khatib, who runs the Good Governance and Political Reform in the Arab World at the Center on Democracy, Development, and the Rule of Law in Stanford University, wanted to focus on youth and freedom of expression in the Arab World. She said that social media has opened up further space for views on many topics that were considered once taboo such as politics, sex, and religion. “No doubt interactive media pushed the boundaries for what’s permissible,” she said, and that young people are no longer willing to accept the status quo as the norm. Khatib has also given the recent example of Tunisia, where Mohamed Bouazizi set himself on fire in what she described as “a desperate plea for the issues of arab youth.” But she added what gives her hope is that young people have not given up and continues their struggle, and thanks to the fact that we live in a world of globalized media, and no authoritarian regime in the Middle East can fully stop the circulating of information. “Youth need a strategy to reach goals,” she concluded, “not just enough to say what they want, but also a way to find what to do.”

Diane Singerman, the associate professor at the American University School of Public Affairs, decided to focus on a slightly different angle on the issues facing Arab youth today. This issues, she said, was extremely ignored: the question of marriage. In the Arab World, adulthood equals being married. However, it is very expensive to get married, and because of the high unemployment rate it is difficult for young people to work and save for marriage. This leads to what she called “wait-hood,” the stage between childhood and adulthood that can only be reached by getting married. Signerman cited the example of Egypt, which has the latest age of marriage anywhere in the world outside china. According to studies, 50 percent of men in Egypt are unmarried, and when they do get married they get married later and later. That’s why youth unemployment should be seen in the lens of getting married, Singerman said. Young men are political excluded because of repression, economically hurting because of unemployment, and because they can’t make money to get married they become socially excluded