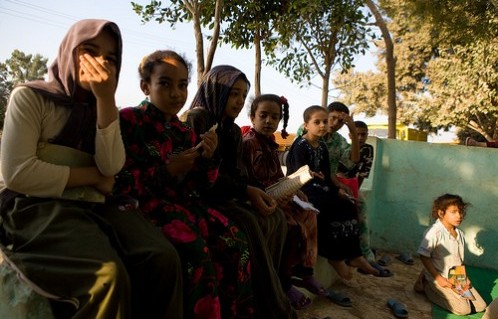 My name is Lama Zeinoun Tabet. I am a 36-year-old woman living in Beirut.

In 2007, I worked as a trainer with the WEPASS project, developed by the United Nations Population Fund and the Lebanese National Commission for Women. The objective of the project was to empower rural women in Lebanon, and it was implemented in ten Lebanese villages in South Lebanon and the Bekaa Valley.

I was asked to develop and implement training sessions on household budgeting for the women in the various villages. The project went well. I conducted three workshops in each village and the women who participated were taught the basic concepts of variable and fixed revenue, variable and fixed expenses, and income. They acquired the financial skills to build a budget and maintain it. I was satisfied with my work until we reached a village where the women selected for the project did not show up. Instead, a group of women attended who could neither read nor write.

On the first day project coordinator Elissar Doueihi and I were not able to train them because they were illiterate. I felt helpless. All the books and resources I had were powerless in front of these women who were limited in their skills, but very determined to learn.

But they asked us to train them on something – anything. They all worked with their husbands in the fields, growing crops and also taking care of their homes. They wanted to learn and insisted that they be able to participate in the trainings somehow.

I came back to Beirut that night with Elissar. During our trip back we tried to come up with something to teach these women. Their thirst for learning and determination was so intense that it was impossible for us to surrender to the idea of not training them.

We spent the next week discussing and talking about what we could do, until we had an idea. We thought about the fact that even though they were illiterate, they could all see. So why not use images and colours to teach them at least the meaning of fixed and variable expenses and how they could distribute their income accordingly?

We spent another week preparing coloured envelopes, papers and stickers with different images on them.

We went back to the village a week later and the session went extremely well. Using colour codes and images, we were able to teach them the difference between variable expenses, fixed expenses, revenue and savings. They were able to identify specific types of expenses and revenues using the picture stickers. They also learned how to distribute their revenue among the expenses and savings using the colour-coded envelopes.

In reflecting on this project, I think about how often those planning projects say that pre-planning is very important for success. I totally agree. The workshops done at nine of the villages we visited went on as planned. However, the challenge that Elissar and I faced in this tenth village was worth a thousand sessions of pre-planning. We could have retreated with the excuse that the kind of project we were conducting required literate participants. But we did not.

Why? Because the look in these women’s eyes said, “We want more.” As we sat down the first day and explained to these women why the planned project would not work for them, I did not see despair or disappointment. I saw a look that said despite the challenges, “Do something for us; we want to learn.” And so, we did.

Watching these women working with the coloured envelopes, papers and picture stickers made me realise that there are no barriers that anyone can hold in front of determination – even if one of those barriers is illiteracy.

Lama Zeinoun Tabet lives in Beirut and wrote this winning article for the 1001 Stories of Common Ground Positive Change in Action competition.