This is motivational speaker season. Before the weather gets insufferably hot – between June and October – a stream of high-profile personalities come here on paid gigs to bestow their wisdom upon us locals. If you’re Bahraini, the government pays most of the cost of the ticket. If not, you’ll have to stump up a price equivalent to that for a headline act in Vegas – anything in the range of $80-$150. 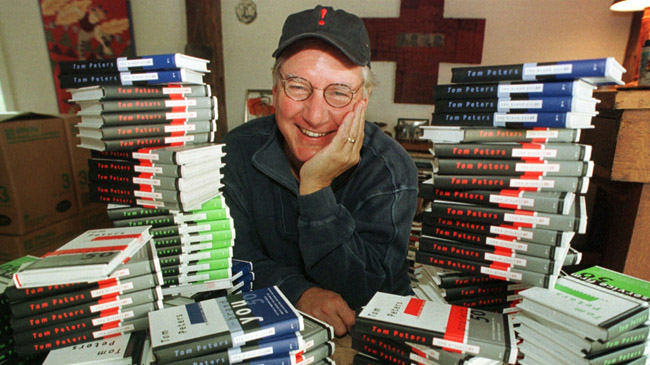 Caption: Up next in the Gulf: Tom Peters, the biggest “guru” of them all?

Most of them consider themselves gurus – or at least their publicists and agents do. Their imminent presence is announced by posters on lampposts and on hoardings along the highways. Their faces peer from the posters – looking well-coiffed, wise and benevolent.

Most of them hail from the US – the ultimate fount of business knowledge in the estimation of many in the Gulf countries. A positive piece in the love-hate jigsaw that defines the relationship between America and the Arab world. In recent months we’ve had John Gray, “Author of Men are from Mars, Women are from Venus”, Laura Stack “The Productivity Guru”, Jack Canfield, author of “Chicken Soup for the Soul”, Deepak Chopra, guru of alternative medicine, well-being and much besides. Next month the uber-guru, Tom Peters, will be here, presumably to tell us how to find excellence.

Just as the price of a ticket to a rock concert is determined by the number of albums the act has sold, the gurus justify their fees – usually in the tens of thousands of dollars – by the number of books they’ve shifted. Zillions usually, in just about every language known to man.

The books are usually variations on a theme – the subject of their original hit. There aren’t too many shape-shifters within the motivational community – artists like Bob Dylan and David Bowie who morph from one musical form to another according to their fancy at the time. No, these guys stick to their knitting. They’re great speakers and the audiences love them. I often wonder whether the medicine they prescribe lasts longer than a day or two. But if a guy listening to John Gray decides to take an alternative approach to beating his wife when he gets cross, I reckon that’s worth the cost of a ticket in anyone’s money.

Am I jealous of these guys? You bet. How wonderful it would be to swan around the world giving fifty talks a year in exotic parts of the world and ending up with five million dollars, while your acolytes, otherwise known as “staff”, beaver away at building your brand, helping you sell ever more books and laying the foundations for yet another variation on the theme.

But fair play to them. It takes years of hard work to become a guru. Many of them struggled in the wilderness before hitting the magic formula. Personally I don’t have what it takes to churn out endless tomes that establish my credibility. The speaking bit and the exotic locations I would love, but I fear I would become bored to death going on and on for a lifetime about one subject. Life’s too short, and there’s too much else to discover.

Last night I met a guru of a different stripe. Yet another American, but this guy appears to have missed out on the official largesse, and his visit was not accompanied by the usual promotional fanfare. What’s more, the event was free.

Dr Michael Stankosky was hosting a “conversation” at Bahrain’s Capital Club on knowledge management. That’s a subject I know little about. Fifteen years ago one of the companies I co-owned was providing consultancy on KM. Or trying to. It’s an interesting area of business, and we did some fascinating projects. But whether we were ahead of our time or barking up the wrong tree, we never made much money out of it, and eventually moved to other stuff. The problem was that nobody really understood what KM was.

According to Stankosky, most people still don’t. Is it a way to boost your balance sheet by recognising the intangible assets in your organisation – the knowledge and skills of your people? Is it about creating giant systems for collating information that can then be available to everyone? Is it – as Stankosky believes – about leveraging knowledge assets to ensure the survival and ultimately the prosperity of the organisation? I’m with him on that one, by the way.

I was looking forward to hearing what a professor from George Washington University had to say about the latest thinking on KM. The problem was that I learned more about the good Dr Stankosky than the subject he was supposedly there to discuss.

Now I’m all in favour of using personal experience to illuminate a subject. I do this all the time in my writing, public speaking and in the workshops I facilitate. Stories last longer in the mind than elegant explanation of theory. Yes, you need the theory, but the stories provide the glue that lodges theory in permanent memory.

But over a two-hour session we were treated to a bewildering stream of information about the man himself. Twenty-odd years in the Marine Corps, spells as a software engineer, diplomat, businessman and academic. Oh, and butcher, skier, would-be priest, European racketball champion and God knows what else. That and an endless stream of references to the great and the good with whom he is personal friends.

Perhaps I’m being unfair. There was plenty of talk about knowledge management. It’s just that what stayed in my mind was all the stuff about him. This guru has lived, and likes talking about it.

At the beginning of the session, he also told us that he likes being challenged. When I suggested that culture has something to do with the failure of organisations to capitalise on knowledge, and gave as an example the tendency in Saudi Arabia to deal with failing organisations by establishing parallel structures, he slapped me down. That’s a process issue, not a cultural one, he said, and continued to mutter darkly about culture throughout the rest of the talk. He’s a systems thinker, you see.

When a woman in the gathering asked what I thought was an intelligent question, he did a Michael Winner, and began his answer with “well you see, my dear….” Clearly there was only one guru in the room, and he made sure we didn’t forget it. What’s more, as we learned from him, his gurudom is not confined to KM – it extends to software as well.

For all that, the good doctor was a welcome antithesis to the smooth inclusivity of many of the motivators who bless us with their presence. He was here for another event, and I doubt if he was paid for his time with us. He clearly loves his subject. I can relate to a guy who has done many different things in his life. I have too.

I also enjoy cranky, opinionated people. They test our own opinions. They make us think, and sometimes they make us cross. I would have liked to have had a good argument with him over a beer about a number of things he said, but that session wasn’t the place or the time. He has much of the late Margaret Thatcher about him. Possibly (though I don’t know this for a fact) admired and disagreed with in equal measures, but someone who relishes a bit of intellectual strife and commands great respect from his followers.

I especially enjoyed one comment he made early on: “people don’t go to university to learn – they go to get degrees.” Such a remark could only have been made by someone who has spent much of his life outside the education industry. And for that observation I’ll ignore all the moments when I stopped to think “who the hell does this guy think he is?”

So the gurus keep galloping though Bahrain. Next up, Tom Peters. Now who does he think he is, I wonder?