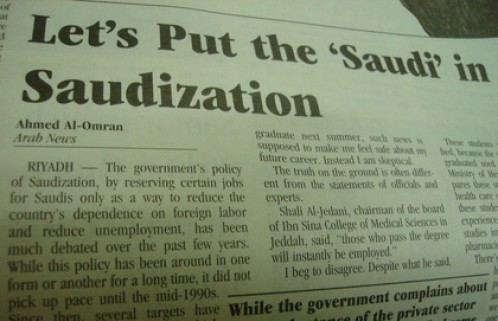 There’s a certain amount of finger-pointing going on in the Saudi media today about why efforts to put Saudis in jobs currently held by foreign workers, Saudization, has failed. Saudi Gazette/Okaz carry a piece blaming private sector employers, claiming that those employers insistence on low salaries and little-to-no benefits is keeping Saudis out of jobs they could do with minimal training. Arab News, for its part, cites the Shoura Council’s blaming the government for not enforcing rules already on the books.

I note that neither article explicitly addresses the issue of Saudi women in the workplace.

JEDDAH: Economists say the private sector can provide 250,000 jobs in only six months, if it seriously commits to the Royal Decree calling for raising the Saudization rate.

The people can be employed in retailing, for salaries ranging between SR2,500 and SR3,000, and clerical jobs occupied by thousands of expatriates, they said. The economists also warned against the monthly SR2,000 unemployment benefit ordered by the King becoming a goal for some people who could quit their jobs to apply for it, noting that this tendency would fundamentally damage the noble project.

Fahd Al-Ahmadi, an economist, said: “The private sector has been evading implementing Saudization for 20 years under various pretexts, like Saudis are not serious or want more than they are offered in terms of salary.” “There are thousands of private-sector retail shops, which, with little employee training, can be all filled with a million Saudi employees paid salaries that do not burden the private sector.”
…

RIYADH: The Shoura Council on Sunday blamed the government for not taking action to fill more than 150,000 existing government vacancies.

The observation was made at the council’s weekly session held under its Chairman Abdullah Al-Asheikh.

The members said despite royal decrees and Saudization programs introduced by the government, the concerned sector has not taken suitable measures to fill these vacancies with Saudi personnel.

Based on the observations made by members, the Shoura suggested the Ministry of Civil Service chalks out a five-year program to phase out non-nationals in the public sector and replace them with Saudis during a set timeframe