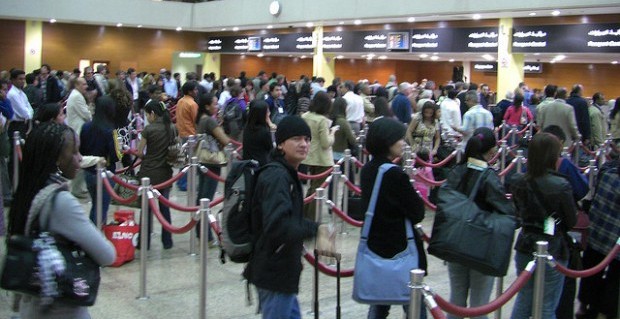 The E-Gate card is dead. Honest, it’s in Gulf News and everything so it must be true!

Immigration has installed a nifty new scanner at Terminal 3 of Dubai International Airport that’ll scan data from machine-readable passports and combine this with biometrics to give an instant ‘no touch’ entry system.

Up until now, if you didn’t want to join the long, shuffling queues at immigration and have your passport filled with inky stampy things, the E-Card was the way to go. Although not for me, sadly, as the system decided to start refusing to read my thumbs a couple of years back, even after I’d gone up to the E-Gate centre and had ’em rescanned.

It’s actually been ten years since the introduction of the ‘old’ E-Gate card system.

I’ve used these new scanners at Heathrow and they’re fast – certainly within the 15 seconds GN mentions. The scheme is to roll them out to all of Dubai’s entry points after a two month trial at Terminal 3. They use facial recognition technology to compare a snapshot of your mug with the one stored in the chip in your machine readable passport.

It’s a pretty advanced move for the UAE – while over 170 countries now issue machine readable passports, fewer issue chip-enabled ‘e-passports’ and only six countries are using ‘heightened biometrics’ such as facial scans, fingerprints or retinal scans in their border scanners. It’s soon to be seven!