‘Conscription’: Is It Really the Answer to Saudi Job Woes? 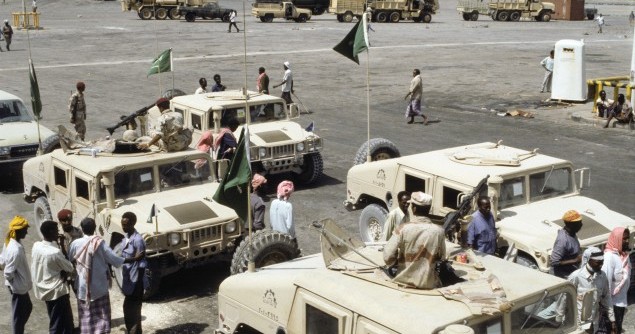 The various efforts to put Saudi Arabs into jobs — Saudization, in its current form called nitiqat — all run into the same problems. While foreign workers hold a huge number of jobs that could be done by Saudis, most Saudis don’t want those kinds of jobs and few are even qualified to perform them. Recently, the Ministry of Labor announced an SR200 ‘surcharge’ on all foreign workers employed in excess of Saudi workers at any given company, thus raising the cost of employing expats and ‘encouraging’ the companies to replace them. The squeals started immediately, along with the seeking of exemptions.

Saudi Gazette runs a piece from its sister publication, the Arabic daily Okaz, that suggests a lighter government hand. It acknowledges that the jobs are not desirable and that there’s a problem with Saudis’ ability to perform the jobs. The solution suggested, though, hardly seems like a ‘lighter hand’. The writer thinks that those men without education should be conscripted, apparently into the military. Here, he asserts, they would learn both discipline and skills.

Well, maybe. But I’m not sure that putting the ill-educated into a relationship with arms is a particularly good idea. Perhaps a Job Corps that swept up all high school leavers and avoiders would serve to train them to do work that is needed. This wouldn’t guarantee that they’d actually do work that is physically demanding, earns low wages, and even lower social status, however. Nor does it seem like a step forward in human rights. There are already technical schools throughout the Kingdom, after all, open to those who wish to learn trades and crafts.

Some method of making the jobs more appealing must be found. The Ministry is trying to force employers to raise wages available to Saudis by making foreign workers more expensive. If enough foreign workers are forced out of jobs by unwilling employers, then something will have to give, of course. Just what gives, how quickly, at what cost, though, is very murky.

The article does not mention the possibility of opening more jobs to women, women who have shown the desire to take on jobs even if they carry low social status. There is little that prevents women from taking on jobs like masonry, painting, and welding other than government and society preventing them from doing so.

LABOR Minister Adel Fakieh has become a star in the local press and not a day passes without his pictures and statements in print.

Fakieh makes controversial decisions that polarize public opinion, especially in the private sector. His move to impose a monthly SR200 fee per expatriate worker on companies that employ more foreigners than Saudis has triggered the latest controversy.

These fees will no doubt increase the cost of recruitment of foreign manpower. It is an established fact that in many companies, especially in the construction sector, the employment ratio is 90 foreign workers to less than 10 Saudis. This is because Saudis are unwilling to accept labor-intensive jobs. Therefore, the SR200 monthly fee will not help Saudization efforts in these companies because they are unable to find Saudi workers.

The chambers of commerce and industry have openly objected to the decision.