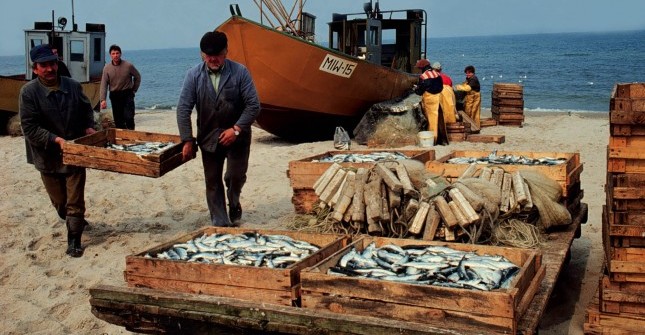 Wander along the port at Essaouira at around noon on most days and you will see fishing boats unloading their shimmering catches as they’ve done for hundreds of years. Boxes of fish are set up on stalls or simply laid along the quayside, where locals buy their lunch and restaurants stock up for their fancy diners, the price depending on how good you are at haggling or what’s left as the crushed ice they lie on melts.

The life of a small scale fisherman has always been a hard one; up at four a.m. to check if the weather will allow them to put to sea, paying out for petrol and boat rental, even if the nets come home empty, and splitting the proceeds of the sale of his catch with crew members. But the five-year U.S. Millennium Challenge Corporation’s Small-Scale Fisheries Project aims to improve the lives of fishermen throughout Morocco, typically some of the country’s poorest residents by modernizing the means of catching, storing and marketing fish, and help fishermen get access to both local and export markets. As much as anything, the project is helping the vendors who trundle through small villages selling the fish they buy on the quayside each day.

On most days, Essaid Sadik would arrive at a port shortly after the first fishing boats docked. He would buy what he could and then drive to nearby villages and start selling – usually sardines and other small fish. As temperatures rose during the day, the fish sometimes began to spoil, occasionally making him and his customers sick.

Now Sadik is one of about 600 mobile fish vendors to receive a new heavy-duty, three-wheeled motorcycle and training through the project. His motorbike is equipped with an insulated ice chest to help preserve the quality of the fish and its value, and can keep fish fresh for up to 48 hours. He has received training which covered marketing, proper hygiene, product handling, quality preservation, small business management, access to financial services, and formation of associations and cooperatives.

Sadik is proud of the uniform his cooperative provides, white coats, matching hats and Wellington boots. “It’s not just nice – it’s really, really nice,” said Sadik, a father of two. “We have a newfound dignity because of the project.”