Underground Rail Next Stop for Jeddah 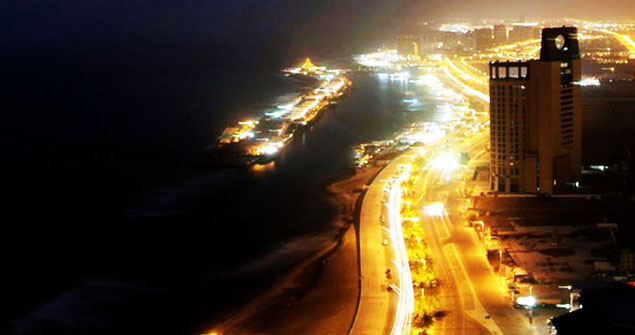 Jeddah, Saudi Arabia’s second-largest city, is a narrow metropolitan area, running north-south on the eastern coast of the Red Sea. Mountains bar its expansion to the east; the Red Sea, to the west. Traffic in the city is dense and, what with Saudi driving and infrastructure being what they are – not to mention the the roads often approach impassible.

Al-Arabiya TV carries a Reuters report on planning for a subway system for the city. It’s in its earliest planning stages and there’s no timetable established, but this might relieve traffic congestion considerably. The challenges in building underground in Jeddah, where the water table is sometimes just inches below the surface, are considerable, but likely not insurmountable… given enough money.

(Reuters) Saudi Arabia is preparing plans to build a metro system in its second largest city Jeddah, a project that would cost around 35 billion riyals ($9.3 billion), a deputy mayor of the city said on Sunday.

The metro system, the third one planned in the kingdom, would be 108 kilometers (68 miles) long. It would have three lines and 46 stations, according to initial studies, said Ibrahim Kutubkhana, deputy mayor for projects and construction.

“Now we are in the phase of completing the initial studies…and this is being carried out by the Ministry of Transport. Later it will be tendered to international consortia for engineering, procurement and construction,” Kutubkhana told Reuters.

The time frame for the project will be set after the initial studies are completed, he added.
…