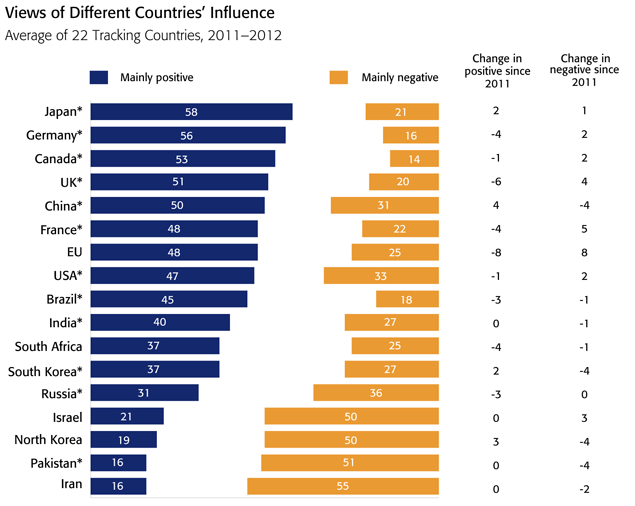 The BBC commissions an annual poll of international attitudes toward the world’s major nations. The results are in for the 2012 edition (full version) and they aren’t good for Israel.

The proportion of respondents giving Israel a favourable rating remains stable, at 21 per cent. Out of 22 countries polled in 2011, 17 lean negative, three lean positive, and two are divided. 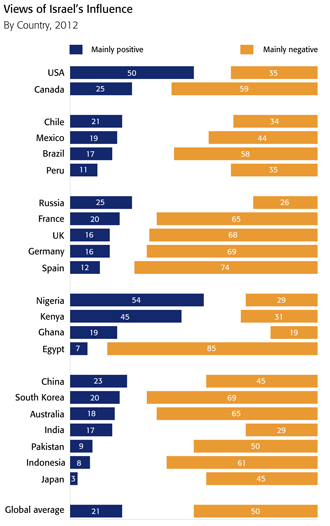 There is only one country in the world where views of Israel have become more favorable…you guessed it: the U.S. Thanks to MFA hasbara efforts and the unrelenting pressure of the Israel lobby, perceptions of Israel here have improved and are now at the highest level (50% positive) since tracking began in 2005.

There are those among the pro-Israel crowd who will argue quite cynically that this is all the support Israel needs. If the rest of the world says Israel can go to Hell, well then, what does it matter? Our sugar daddy is willing to keep the money (and weapons) flowing. The rest of ‘em can go to Hell themselves. Those of us on the left have to concede that they have a point. But only up to a point.

Relying on hasbara to bolster your image in the world is the equivalent of running on fumes. Sooner or later the fact that you have no real record to run on is bound to catch up to Israel.